ICA is temporarily closed in preparation for our new season of programming.Visit us on September 16 for the opening of Sissel Tolaas: RE_________
ICA Annual Benefit 2021
Select Date
Filter 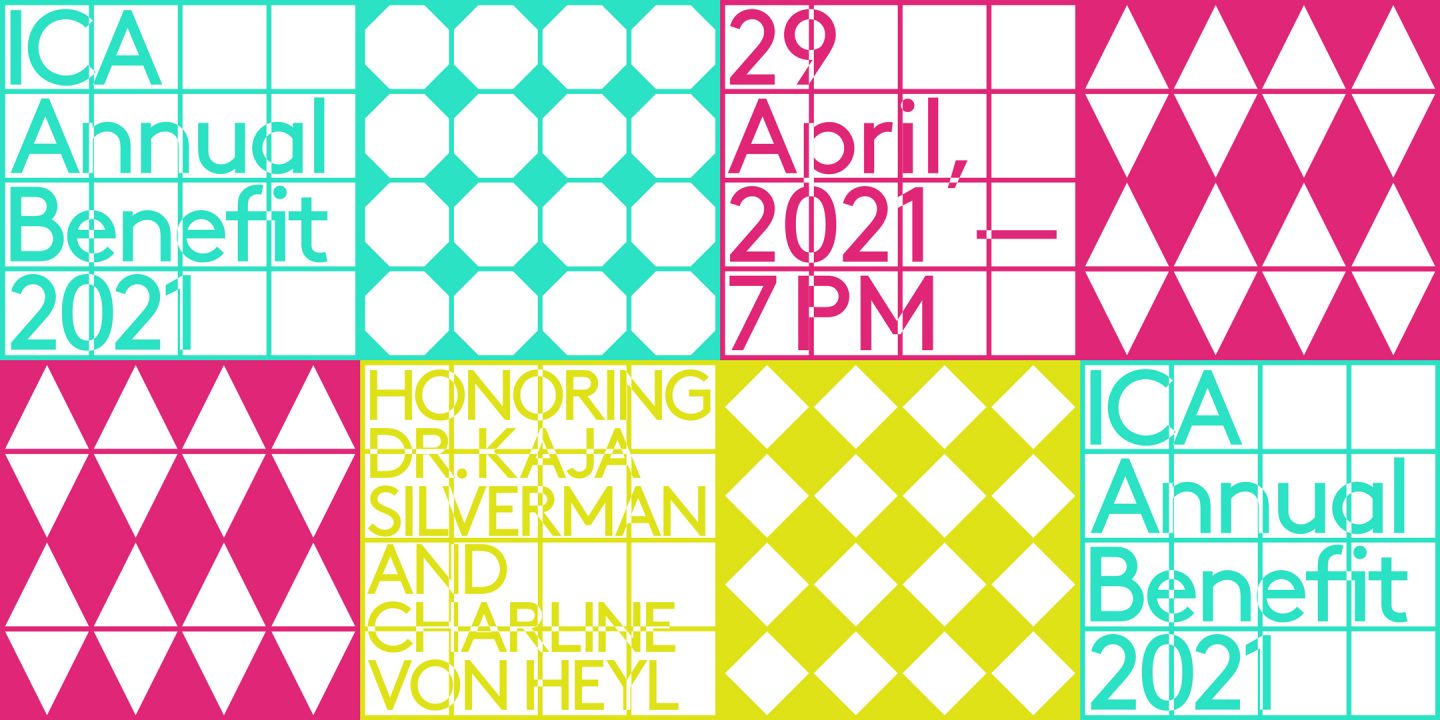 Get ready for ICA Annual Benefit 2021! On April 29, from 7-8PM, join us for an extraordinary virtual celebration honoring Dr. Kaja Silverman, distinguished art historian and Keith L. and Katherine Sachs Professor Emerita of Contemporary Art at The University of Pennsylvania, and world-renowned artist Charline von Heyl.

Tune in for remarks from Zoë Ryan, ICA’s Daniel W. Dietrich, II Director, and hear tributes from a myriad of artists, scholars, curators, students, and supporters inspired by our honorees and who champion ICA’s mission and vision. Hear Dr. Kaja Silverman and Charline von Heyl, reunited in conversation with artist Carrie Schneider, a decade after von Heyl’s first U.S. museum survey at ICA and enjoy a special performance by musical duo, Enohem.

The limited-edition print for ICA Annual Benefit 2021 has been graciously donated by artist Cauleen Smith. The work was taken from Black And Blue Over You (After Bas Jan Ader For Ishan); a short film featured as a part of Cauleen’s 2018 exhibition, Cauleen Smith: Give It or Leave It. A copy of this year’s print is available to supporters who contribute at the Muse or Golden Muse level.

ICA Benefit 2021 is free and open to the public; however, donations, of any size, are encouraged. Supporters at the following levels will receive additional benefits.

Please make all checks payable to the “Trustees of the University of Pennsylvania.” Checks may be mailed directly to:

Dr. Kaja Silverman is the Keith L. and Katherine Sachs Professor Emerita of Contemporary Art at the University of Pennsylvania, and the author of nine critically acclaimed books on topics ranging from the female voice in cinema, to the life and work of artistic visionary James Coleman. She is currently working on the second of three interconnected volumes on the topic of photography. The first volume, The Miracle of Analogy, appeared in 2015.

Before joining the History of Art Department at Penn, Silverman taught for many years at the University of California, Berkeley. She wrote Speaking About Godard during this period with Harun Farocki, with whom she also taught four seminars at Berkeley.

Earlier in her career, she taught at the University of Rochester, Brown University, Simon Fraser University, Trinity College, and Yale University. Shortly after arriving at Penn, Silverman was awarded a Distinguished Achievement Award by the Mellon Foundation, which has provided the motivation and the funding for a wide range of events: academic lectures, public conversations with artists and curators, artist residencies, and two major conferences, the first of which was in conjunction with Charline von Heyl’s exhibition at ICA.

Charline von Heyl was born in Germany in 1960 and has lived in the United States since 1996. She studied painting in Hamburg and Düsseldorf and participated in the Cologne-based art scene in the 1980s. She currently divides her time between New York, NY and Marfa, TX.

Her work has been exhibited both in the United States and abroad, including solo museum exhibitions at the Deichtorhallen Hamburg (2018), the Hirshhorn Museum and Sculpture Garden, Washington DC (2018); the Museum Dhondt-Dhaenens, Deurle, Belgium (2018); the Tate Liverpool, United Kingdom (2012); the Kunsthalle Nurnberg, Germany (2012); Le Consortium, Dijon, France (2009), and the Vienna Secession, Vienna, Austria (2004), among many others.

Von Heyl’s works are in the collections of the Musee d’Art Moderne de la Ville de Paris; the Tate, London; the Museum of Contemporary Art, Los Angeles; the Hammer, Los Angeles; the Museum of Modern Art, New York; The Guggenheim Museum, New York; the Institute of Contemporary Art, Boston; and the San Francisco Museum of Modern Art, among others. She is represented by Petzel Gallery in New York, Galerie Gisela Capitain in Cologne, Galerie Capitain-Petzel in Berlin, and Corbett vs Dempsey in Chicago. 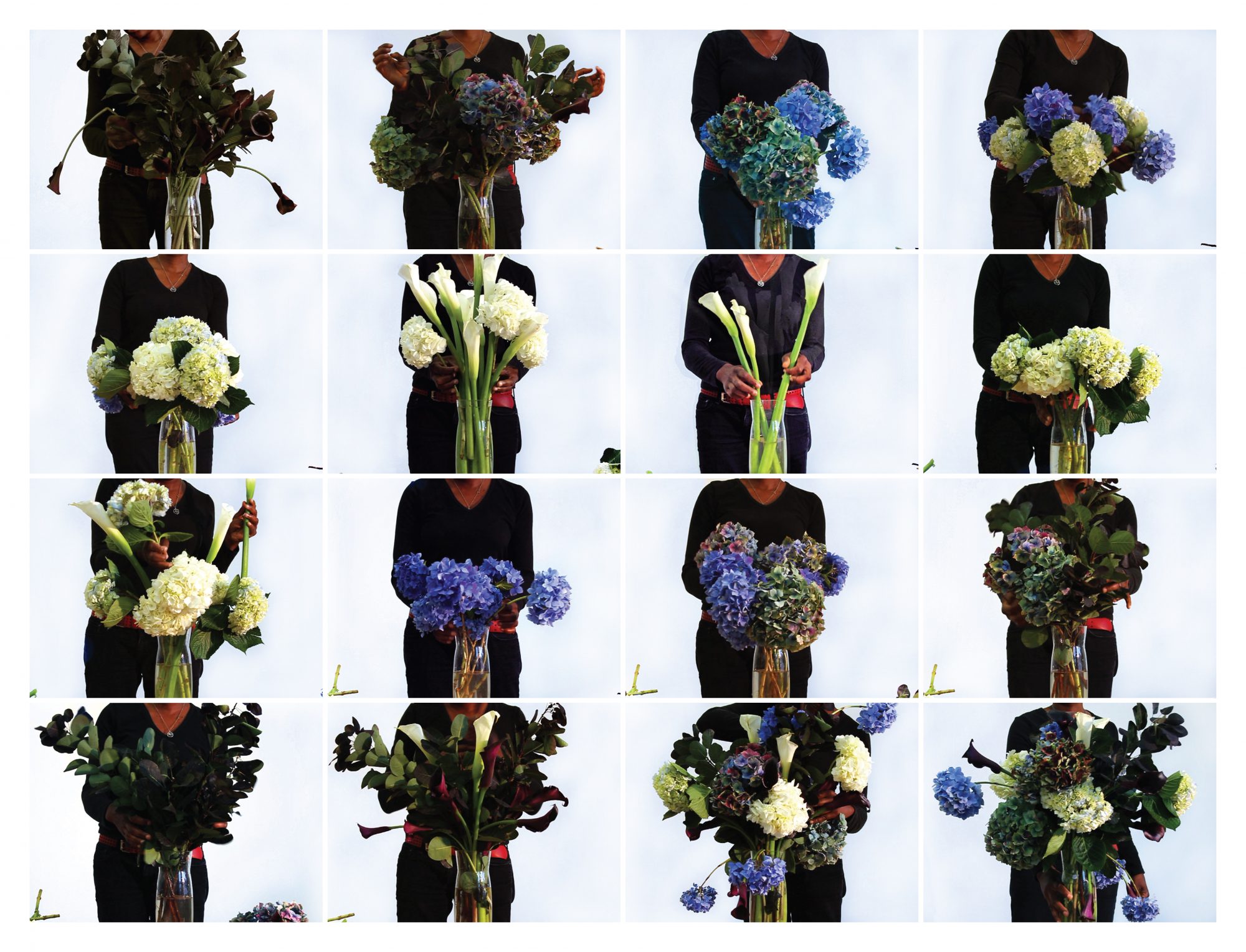 Cauleen Smith: Photo grid from Black And Blue Over You (After Bas Jan Ader For Ishan) Books & Editions - Print