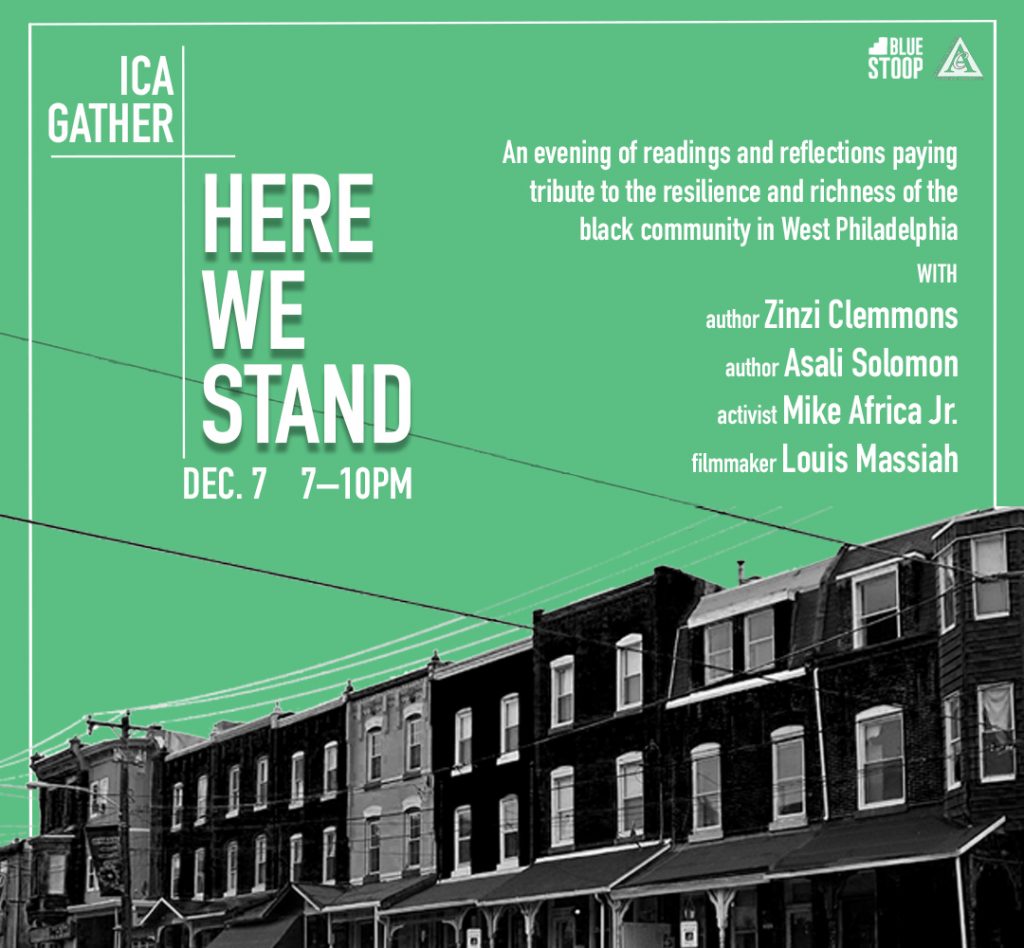 Here We Stand is an evening of readings and reflections paying tribute to the resilience and cultural richness of the black community in West Philadelphia. The title comes from Paul Robeson’s autobiographical book, Here I Stand, where the artist and activist provides a candid account of his political views and engages the reader in considering how black liberation can exist in the midst of racial oppression enacted by the United States government and those in support of white supremacy.

In the spirit of Paul Robeson’s 1920’s salons, join Blue Stoop, ICA, and the Paul Robeson House & Museum for an evening of readings and reflections by acclaimed fiction writers Zinzi Clemmons and Asali Solomon, activist Mike Africa Jr., and filmmaker Louis Massiah as they reflect upon West Philadelphia through their work. The program concludes with refreshments and a dance party with musical selections provided by DJ John “The Liberator” Morrison.

ICA Gather is a program series dedicated to engaging in collaborative projects with community members and organizations throughout Philadelphia.

Mike Africa Jr. is a member of MOVE, a black revolutionary organization committed to social and environmental justice. He is a conscious hip hop artist and motivational speaker whose message focuses on the resiliency of the human spirit. Africa takes a multi-modal approach to his presentations, combining music and performance to create a dynamic encounter with the audience. He is the son of Mike Africa Sr. and Debbie Africa, who are also members of MOVE and are a part of a group known as the MOVE 9, which consists of nine members of the organization that served time in prison for the alleged murder of a police officer.

Zinzi Clemmons completed her undergraduate studies at Brown University and received her MFA from Columbia University. Her debut novel, What We Lose (Viking, 2017), is loosely based on her experience as the primary caregiver for her mother during her bout with cancer. The book received numerous accolades including “Debut Novel of the Year” by Vogue, the Brooklyn Public Library Literary Prize, the International Dublin Literary Award, and longlisted for the Andrew Carnegie Medal for Excellence in Fiction. She is a National Book Award 5 Under 35 honoree. Clemmons was raised in Philadelphia and currently resides in Culver City, California.

Louis Massiah is an independent filmmaker who explores historical and political subjects. His producing and directing credits include Trash (1985), The Bombing of Osage Avenue (1986), Cecil B. Moore (1987), W.E.B. Du Bois: A Biography in Four Voices (1995), and Louise Alone Thompson Patterson: In Her Own Words (2002). He also produced two films for the PBS series, Eyes on the Prize II ( 1990). In addition to his film work, Massiah founded the Scribe Video Center, a West Philadelphia-based media arts organization that provides training and equipment access to emerging filmmakers and community organizations. Massiah is a graduate of Cornell University and the Massachusetts Institute of Technology, receiving a degree in documentary filmmaking.

Asali Solomon spent her formative years in West Philadelphia and continues to call the area home today. In 2002, she received her doctorate in English from the University of California at Berkeley, and later earned an MFA in writing from the University of Iowa. Solomon is the author of the novel Disgruntled ( Picador, 2016), which was cited as one of the best books of 2015 by the San Francisco Chronicle and the Denver Post. The short stories in her first book, Get Down (Farrar, Straus and Giroux, 2008) earned her a Rona Jaffe Foundation Writers’ Award and recognition as a National Book Foundation 5 Under 35 honoree. She is currently an Associate Professor at Haverford College, serving as the Chair of the Englsih Department and Director of Creative Writing.