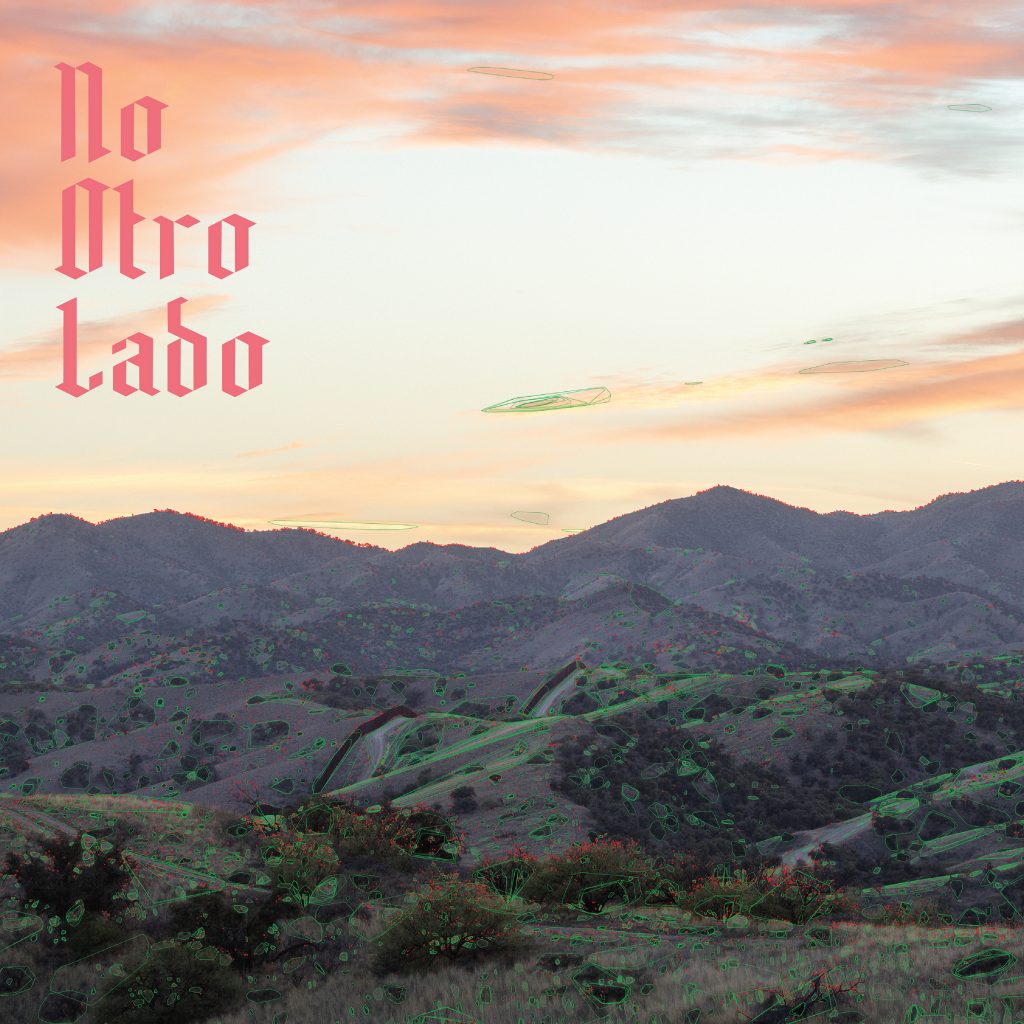 Cover design: Aay Preston-Myint "Near Nogales Maximally Stable Extremal Regions; Good Features to Track, 2017" detail of the original by Trevor Paglen. This is a photograph of the U.S.-Mexico Border, as seen through some of the computer vision algorithms that continually monitor the border for movements and any changes in the landscape.
About

Join writer, activist, DJ, and teacher Marissa Johnson-Valenzuela for a live performance with producer Josh Hey, Koofreh Umoren on trumpet, and Dan Nosheny on tuba, and celebrate the release of Johnson-Valenzuela’s new album No Otro Lado. A panel discussion moderated by Tufts University professor Anthony Romero will feature poet and Harvard University Radcliffe Fellow Javier Zamora, the interdisciplinary artist, writer and organizer J. Soto, and Ghanaian-American producer Kilamanzego. Music videos by local filmmakers Sheila Quintana and Rashid Zakat will be on view and digital, along with limited-edition vinyl versions of No Otro Lado will be for sale. Food and refreshments will be served.

No Otro Lado is the first in a forthcoming series of political art albums curated by Romero and funded by Tufts University. With point production and expertise from Josh Hey, Johnson-Valenzuela compiled samples and live instrumentation to produce a 13-track album of songs and interludes in English and Spanish that feature lyrics and vocals by Johnson-Valenzuela as well as guest vocalists.

No Otro Lado posits that the United States and Mexico are essentially one country with a border that is used to justify a caste system. At a musical intersection of hip hop, reggaeton, Latin music more generally, poetry, history, futurity, and contemporary politics, No Otro Lado is accessible in its genre defiance.

Marissa Johnson-Valenzuela is a writer, editor, community college professor, abolitionist, founder of Thread Make Blanket press, and sometimes DJ. Her poetry and prose have been supported by the work of many rad people and projects including: VONA, Lambda Literary, Hedgebrook, The Baffler, American Poetry Review, make/shift, As Us, Acentos Review, HOLD, Solstice, Bedfellows, APIARY, Aster(ix),Philadelphia Printworks, and Organize Your Own: The Politics and Poetics of Self-Determination Movements (Soberscove 2016).

Hailing from the New England area, Josh Hey has been actively working within the East Coast Beat Scene as early as 2008. After moving to Philadelphia in 2006, Hey became a part of the flourishing community of sample-based musicians including Sir Froderick, Iunnowho, Knxwledge, Mndsgn, Poptartpete, Stainless Steel, Suzi Analogue, Swarvy.. just to name a few. Hey cut his teeth in the legendary Cold Seltzer sessions and most notably Blasphemous Jazz: The Bitches Brew Session still available on Extra Lovely Records.

In 2010, Hey was instrumental in the creation of Paxico Records‘ famous living room concert series, Powwaw, which quickly became the home for East Coast producers to share their music with the Brooklyn audience as well as viewers locked in via the video feed. Here, Hey was able to work as a community organizer and help solidify a platform for up-and-coming producer to share their music and strengthen the community through diverse programming.

Hey has gone on to release several albums on Paxico Records, Acorn Tapes and has been featured on projects for Leaving Records, Never Normal Records, B Side By Wale, and NTS Radio.

His most recent collaboration was done with poet/activist Marissa Johnson-Valenzuela, No Otro Lado. Acting as the engineer/producer, Hey and MJV created a LP to discuss the crisis at the US/Mexico border, and the overall hypocrisy of the concept of invisible lines that serve only to divide us. “This was a unique project for me, stepping into a different realm of music and politics. I’m forever grateful for Marissa bringing me on board to help actualize her vision and voice of the project. It’s a conversation that demands our attention in every avenue of the public sphere.”

Anthony Romero is an artist, writer, and organizer committed to documenting and supporting artists and communities of color. His solo and collaborative works have been performed and executed internationally. He is a co-founder of the Latinx Artists Retreat and the Latinx Artist Visibility Award, built in collaboration with J. Soto and OxBow School of Art. He is currently a Professor of the Practice at The School of the Museum of Fine Arts at Tufts University.

An androgynous weirdo with a musical axe to grind, Kilamanzego is a Ghanaian-American who’s been making wonky beats since 2015. In the previous year, K started a hip hop duo w/ Simone Niamani and the one thing they lacked were beats. Their duo idea never became fully realized, but the idea of making indescribable sounds stuck with K. Dedicated to the art of production, K’s influences include J Dilla, Kaytranada, Braeden Bailey, Medasin, and more.

Javier Zamora was born in La Herradura, El Salvador in 1990. His father fled El Salvador when he was a year old; and his mother when he was about to turn five. Both parents’ migrations were caused by the US-funded Salvadoran Civil War (1980-1992). In 1999, Zamora migrated through Guatemala, Mexico, and eventually the Sonoran Desert. Before a coyote abandoned his group in Oaxaca, Javier managed to make it to Arizona with the aid of other migrants. His first full-length collection, Unaccompanied (Copper Canyon Press, September 2017), explores how immigration and the civil war have impacted his family. Zamora is a 2018-2019 Radcliffe Fellow at Harvard University and holds fellowships from CantoMundo, Colgate University (Olive B. O’Connor), MacDowell, Macondo, the National Endowment for the Art, Poetry Foundation (Ruth Lilly), Stanford University, and Yaddo. The recipient of a 2017 Lannan Literary Fellowship, the 2017 Narrative Prize, and the 2016 Barnes and Noble Writer for Writers Award for his work in the Undocupoets Campaign. Zamora lives in Cambridge, MA.

J. Soto is a queer brown transgender interdisciplinary artist, writer, and arts organizer. He has curated and performed work for The National Queer Arts Festival (San Francisco), Links Hall (Chicago), as well as Vox Populi (Philadelphia), Knockdown Center (NYC), among others nationally. His collaborative writing project, “Ya Presente Ayer” can be found in Support Networks, Chicago Social Practice History Series (University of Chicago Press). His organizing projects include the Latinx Artists Retreat (LXAR), launched in 2017 with a group of Latinx artists and administrators and the Latinx Artist Visibility Award (LAVA) for Ox-Bow School of Art in partnership with The School of the Art Institute of Chicago launched in 2015. He is also a 2017 fellow of the National Association of Latino Arts and Cultures Advocacy Leadership Institute (ALI). His writing can also be found in Original Plumbing, Apogee Journal: Queer History, Queer Now Folio, and American Realness 2018 reading series. He is based in New York City.

Cover design: Aay Preston-Myint “Near Nogales Maximally Stable Extremal Regions; Good Features to Track, 2017” detail of the original by Trevor Paglen. This is a photograph of the U.S.-Mexico Border, as seen through some of the computer vision algorithms that continually monitor the border for movements and any changes in the landscape.