ICA is temporarily closed to the public, and all public events taking place at the museum have been canceled until further notice. ICA staff will have remote office hours Monday through Friday, 9AM to 6PM. You may experience some delays with publication orders and archival requests. We thank you in advance for your patience.
In Conversation: Karyn Olivier and Anthony Elms
Select Date
Filter 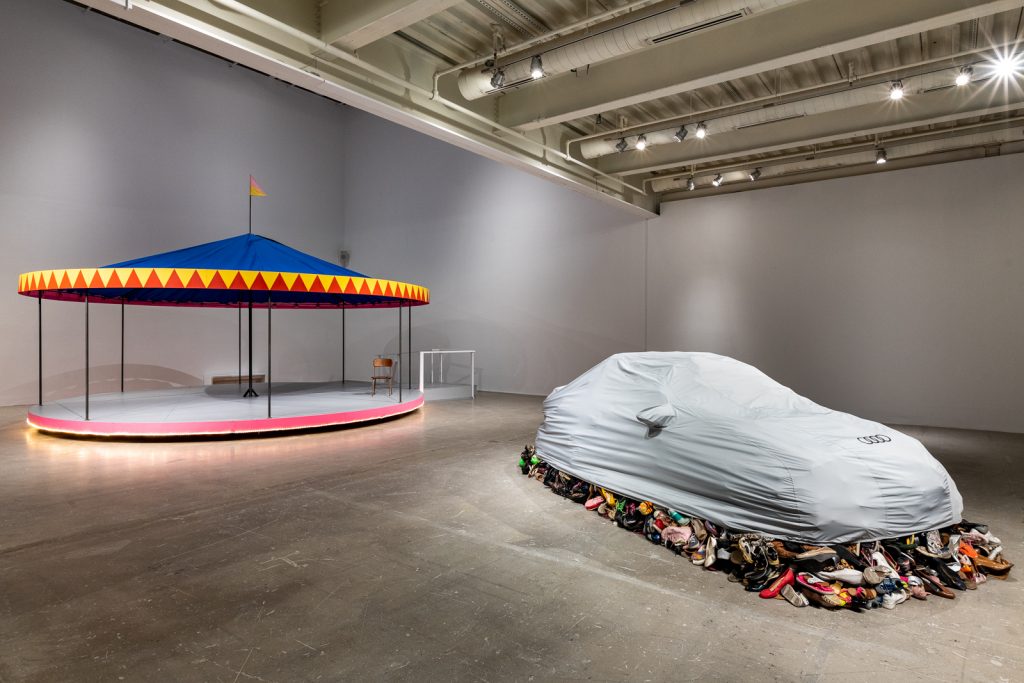 In conjunction with her current exhibition Everything That’s Alive Moves, artist Karyn Olivier will join ICA Daniel and Brett Sundheim Chief Curator Anthony Elms in a live conversation and Q & A session.

ASL interpretation will be provided for this program. Please contact Natalie Sandstrom, Program Coordinator, at nsand@ica.upenn.edu with any questions.

Karyn Olivier (b. 1968, Trinidad and Tobago) received her M.F.A. at Cranbrook Academy of Art and her B.A at Dartmouth College. She has exhibited at the Gwangju and Busan Biennials, World Festival of Black Arts and Culture (Dakar, Senegal), The Studio Museum in Harlem, The Whitney Museum of Art, MoMA P.S.1, The Museum of Fine Arts Houston, Contemporary Art Museum Houston, The Mattress Factory (Pittsburgh), SculptureCenter (NY), Drexel University, the University of the Arts, Ulrich Museum of Art, University of Delaware Museum, among others.

In 2017 Olivier installed a large-scale commissioned work for Philadelphia’s Mural Arts program in historic Vernon Park. She has received the 2018–19 Rome Prize and has been the recipient of the John Simon Guggenheim Memorial Foundation Fellowship, the Joan Mitchell Foundation Award, the New York Foundation for the Arts Award, a Pollock-Krasner Foundation grant, the William H. Johnson Prize, the Louis Comfort Tiffany Foundation Biennial Award, a Creative Capital Foundation grant and a Harpo Foundation Grant. More recently, Olivier has been selected to create a new Dinah memorial at Stenton, following a year-long process in which community members met to shape ideas of what a monument to Dinah should incorporate. Olivier’s work has been reviewed in The New York Times, Time Out New York, The Village Voice, Art in America, Flash Art, Mousse, The Washington Post, Nka: Journal of Contemporary African Art, Frieze, Philadelphia Inquirer, Hyperallergic, among others. Olivier is currently an associate professor of sculpture at Tyler School of Art and Architecture.

Anthony Elms has organized the exhibitions Cauleen Smith: Give It or Leave It (2018), Endless Shout (2016-7), Rodney McMillian: The Black Show (2016), Christopher Knowles: In a Word with writer Hilton Als (2015), White Petals Surround Your Yellow Heart (2013), and coordinated several other exhibitions and projects. He is also a writer and editor of the publishing imprint White Walls Inc. Elms’s writings have appeared in various periodicals, including Afterall, Art Asia Pacific, ART PAPERS, Cakewalk, May Revue, Modern Painters, and New Art Examiner.

Elms has written essays for catalogues and edited collections such as Cosey Complex (Koenig Books), Geof Oppenheimer: Big Boss and the Ecstasy of Pleasures (Mary and Leigh Block Museum of Art), Terry Adkins: Recital (Prestel) and Among Others: Blackness at MoMA (Museum of Modern Art). He has independently curated many exhibitions, including: Interstellar Low Ways (with Huey Copeland); A Unicorn Basking in the Light of Three Glowing Suns (with Philip von Zweck); and Sun Ra, El Saturn & Chicago’s Afro-Futurist Underground, 1954-68 (with John Corbett and Terri Kapsalis). He was one of three curators of the 2014 Whitney Biennial.