ICA is temporarily closed to the public, and all public events taking place at the museum have been canceled until further notice. ICA staff will have remote office hours Monday through Friday, 9AM to 6PM. Shipping on all publication orders is temporarily suspended. We thank you in advance for your patience.
OVC 2020: Duet
Select Date
Filter 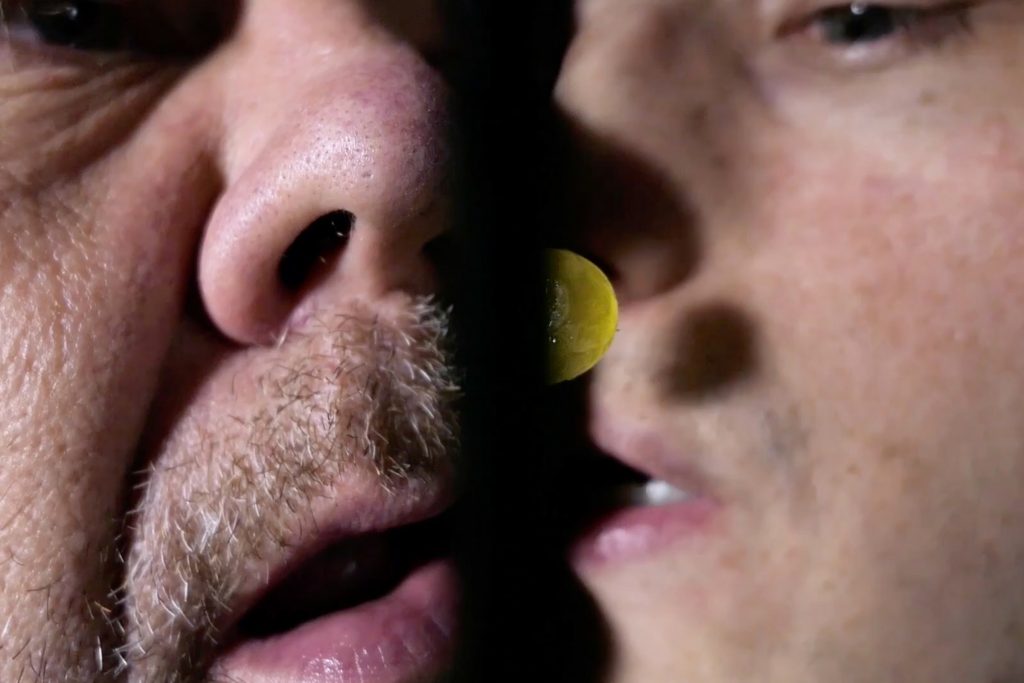 In Duet, John Muse reflects on the experience of recovering from a traumatic illness: “There’s the body you’re living in that’s sick, and then that one disappeared and I’m left with this other thing.” In conversation with Mason Rosenthal, the artist recounts the physical challenges of healing, mulling over fried vocal cords, twitching eyes, and snapping sternums.

Muse pairs voiceover with collaged video, fragmentary images, and a disturbing ASMR-like soundtrack of scratches, pops, and breaths to create a complex tonal balance. Two figures squeeze their faces into an unidentifiable plane that bisects the screen (eerily reminiscent of people on a video call). Mouths press up against glass and frantically suck on pieces of candy, breaking up once-linear scenes into a frenetic cascade of images.

One of the film’s strengths is the way it transitions from complex and confusing to direct and digestible. The flurry of voice and video is initially hard to follow, but the narration gradually guides us to a state of understanding. As the dialogue develops, a clearer picture of the narrators’ journey through illness and recovery emerges. In Duet, Muse strikes a unique balance between formal experimentation and exposition.

John Muse is a writer, filmmaker, and visual artist currently teaching at Haverford College. Mason Rosenthal is a performance artist, director, actor, and teacher raised in Skokie, Illinois. He is a Co-Director of the Philadelphia-based theatre company Lightning Rod Special.