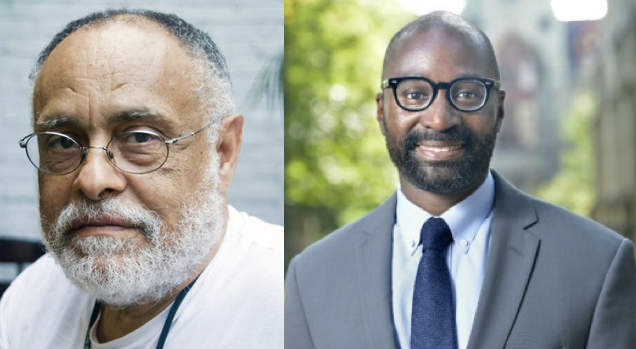 BlackStar Film Festival and the Institute of Contemporary Art co-present a special public conversation between filmmaker/scholar John L. Jackson, Jr. and legendary director and professor Haile Gerima discussing politics, love, black aesthetics, philosophy, self-definition, and depictions of the black body in cinema. This conversation will take place at International House Philadelphia (3701 Chestnut Street) and will be livestreamed to the public through PhillyCAM (livestream available here).

This conversation is part of a private filmmaker’s symposium, but has been opened up to the public to attend. This event is free with required registration. Please register here.

John L. Jackson, Jr., is Dean of the School of Social Policy & Practice and Richard Perry University Professor at the University of Pennsylvania. He is an accomplished academic and filmmaker. Jackson’s work also critically explores how film and other non-traditional or multi-modal formats can be most effectively utilized in specially scholarly research projects, and he is one of the founding members of CAMRA and PIVPE, two University of Pennsylvania-based initiatives organized around creating visual and performative research projects and producing rigorous criteria for assessing them.

Haile Gerima is an independent filmmaker and professor of film at Howard University in Washington, D.C. After completing his thesis film, Bush Mama (1975), Gerima received international acclaim with Harvest: 3000 Years (1976), an Ethiopian drama that won the Grand Prize at the Locarno Film Festival. After the award-winning Ashes & Embers (1982) and the documentaries Wilmington 10—U.S.A 10,000 (1978) and After Winter: Sterling Brown (1985), Gerima filmed his epic, Sankofa (1993). This formally ambitious tale of a plantation slave revolt was ignored by U.S. distributors, but Gerima tapped into African American communities, and booked sold-out screenings in independent theaters around the country. In 1996, Gerima founded the Sankofa Video and Bookstore in Washington, D.C., a cultural and intellectual space that offers opportunities for self-expression, interaction, discussion and analysis through community events such as film screenings, book signings, scholar forums and artist showcases. Gerima continues to distribute and promote his own films, including his most recent festival success, Teza (2008), which won the Jury and Best Screenplay awards at the Venice Film Festival. He also lectures and conducts workshops in alternative screenwriting and directing both within the U.S. and internationally.