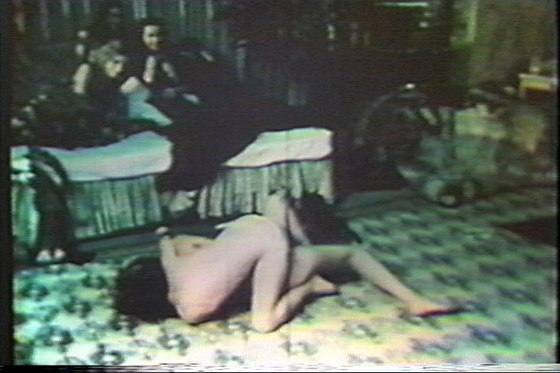 Organized in conjunction with White Petals Surround Your Yellow Heart, ICA presented a rare screening of Cleopatra, Michel Auder’s film that situates itself in the same relationship to Hollywood as the Warhol/Morrisey films of the period. Auder’s work corresponds to Joseph Mankiewicz’s 1963 Cleopatra, starring Elizabeth Taylor and Richard Burton, which Auder’s cast watched and used as the starting point for scene-by-scene improvisation. Auder drew his cast from Warhol’s ensemble—including not only Viva and Louis Waldon, but also Taylor Mead, Ondine, Andrea Feldman, Gerard Melanga, and others. The film revels in epic excess like Mankiewicz’s cinematic debacle which succumbed to vast length, a bloated budget, multiple revisions, and a scandal occasioned by the extramarital escapades of its co-stars.

In Auder’s Cleopatra, Viva is the queen, shrieking with an authority different from the languorous speech patterns she had perfected in Warhol’s films. The (newly invented) snowmobile substitutes for horses; the industrial setting of a factory becomes a showplace of armaments; and the whole Egypt section takes place in upstate New York. The streets and parks of Rome, where Waldon lived at the time, are the staging ground for his role as Caesar. In a wonderful display of Waldon’s charm and skills as an improviser, he begins a dialogue with local police who are then conscripted into the film as Roman soldiers. Auder shot the culminating orgy and gladiator scenes in the famous Cinécita film studio in Rome where Mankiewicz filmed. Due to a fight with his producers, Auder never edited the film, which was lost for many years. It survives as an uncut degraded copy of the original.