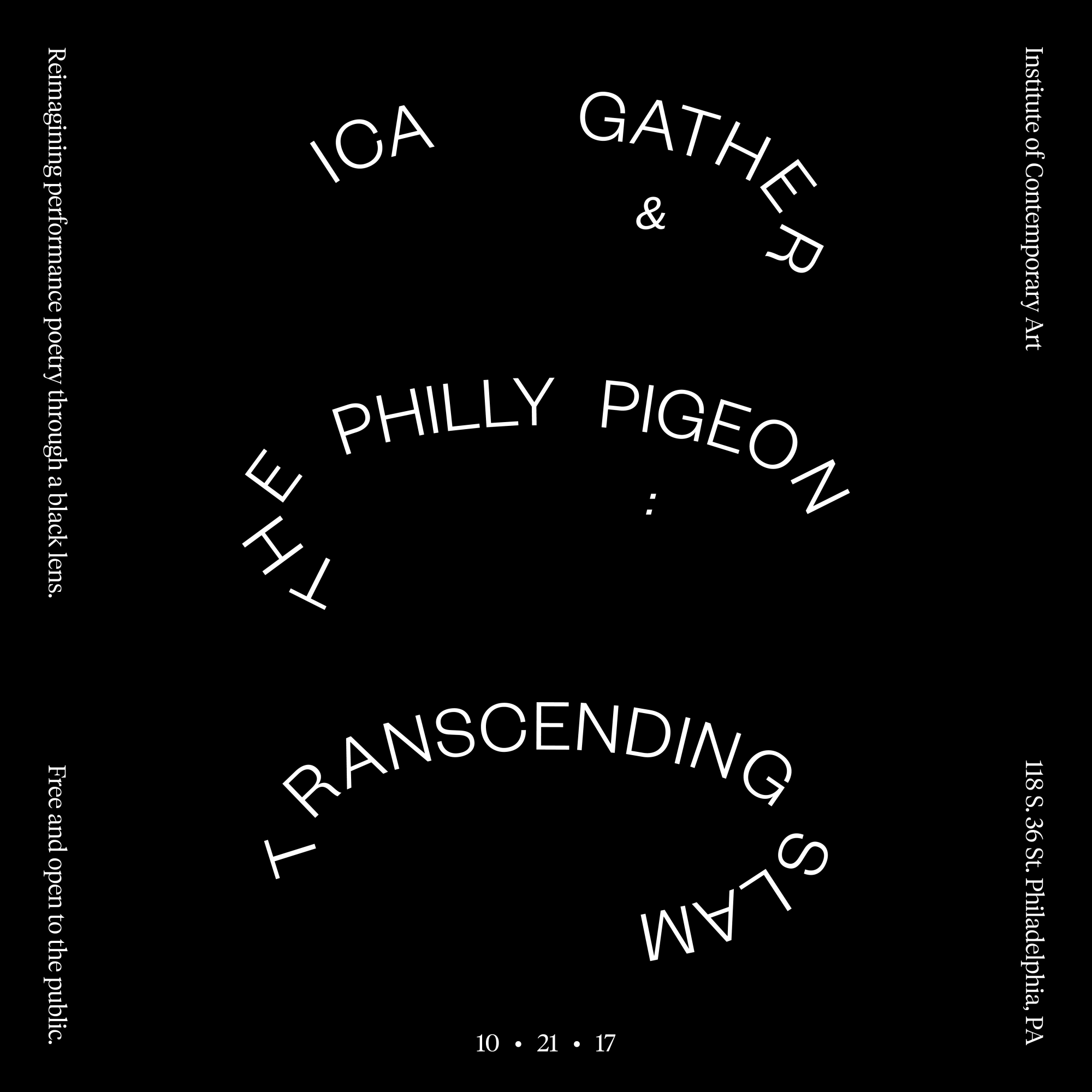 The Institute of Contemporary Art and The Philly Pigeon co-present “Transcending Slam,” the latest in ICA’s Gather programming series that presents special programs collaboratively produced in partnership with area community and campus groups.

In 2016 The Philly Pigeon Poetry Slam stopped sending a team of poets to compete in the National Poetry Slam. Instead, they shifted resources and started an artists retreat & multi-media poetry production that uses dance, photography, music, soundscapes and performance poetry to explore identity, body politics, and personal geography.

Poets from last year’s cast and the upcoming 2017 production, Jasmine Combs, Kai Davis, Kirwyn Sutherland, and Shanel Edwards, will perform poetry and discuss how moving beyond the confines of slam competitions and into multidisciplinary productions has impacted their work and the culture of spoken word here in Philadelphia. The performance and panel discussion will be followed by an audience Q&A and dance party.

JASMINE COMBS is a poet, performer, educator and event organizer from Philadelphia. She is the 2015 Grand Slam Champion of The Philly Pigeon Poetry Slam, a 2015 National Poetry Slam semifinalist, and a winner of the 2016 College Union Poetry Slam Invitational. She also won the 2015 Apiary Magazine STUNG Writing Contest and her winning piece “Night Child” was turned into an animation.​ Currently, Jasmine is an organizer for The Philly Pigeon Poetry Slam and Spoken Word Editor for The Fem Lit Magazine. Her work has been published in Apiary Magazine and Vagabond City Lit.

KAI DAVIS is a writer, performer and teacher from Philadelphia. She’s a two time international slam champion, winning Brave New Voices in 2011 and The College Union Poetry Slam Invitational in 2016. She has been featured on CNN, BET, NPR, and Button Poetry. She is currently an organizer, host, and artistic director at The Philly Pigeon, as well as a freelance teaching artist and a poetry editor for Apiary Magazine. When Kai is not working locally, she tours colleges and universities, performing her original work and facilitating writing workshops.

KIRWYN SUTHERLAND was inspired to write poetry while watching the HBO series Def Poetry Jam. Issues of racial discrimination, apartheid, and survival as a black man discussed in the poetry of Amiri Baraka, Craig muMs Grant, and Black Ice hit home for Kirwyn. He is the author of two chapbooks, X: A Mixtape (self-published, 2013) and X: A Mixtape Remastered (Two Pens & Lint, 2014). Kirwyn has featured at several open mic and slam venues in Philadelphia, Baltimore, New York, DC, Delaware and Detroit, and was one of five poets to represent Philadelphia in the 2015 National Poetry Slam. He is currently working on his first full length book. He previously served at APIARY’s Poetry Editor.

SHANEL EDWARDS is a dancer and photographer from Allentown. Within the last year she has explored the art of writing and poetry. Shanel was a cast member for the first Pigeon production, and the dance workshop facilitator for the first Pigeon Artist Retreat. She is a recent graduate from Temple University with a degree in African American Studies and Psychology. Shanel practices radical softness and honesty as a ritual for a balanced life.