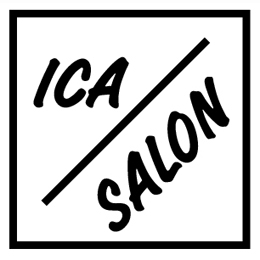 Taking off from a theme in ICA’s fall exhibition, Jeremy Deller: Joy in People, ICA’s Salon, “Staging/Restaging” (October 24, 2012), invited two noted artists and an art historian to talk about their own work related to this theme and to engage in dialogue with the audience. Artist, musician, and Penn Fine Arts professor Terry Adkins described a series of projects reanimating the ghost of American abolitionist John Brown in performance (restaging a 1859 Philadelphia procession honoring Brown after his hanging), video (with ibises), and installation (of iron pipes such as those with which Brown armed many fugitive slaves). Homay King, Associate Professor of History of Art at Bryn Mawr College, spoke about her work on artist Ming Wong, who restages films like Fassbender’s Ali: Fear Eats the Soul (itself a remaking of Douglas Sirk’s All That Heaven Allows), with Wong playing all the roles; King speculated about what it is about digital culture that encourages the many restagings currently proliferating on YouTube. Artist, filmmaker, and USC professor Sharon Lockhart spoke about her new show, Sharon Lockhart | Noa Eshkol, which reanimates the late dance composer Noa Eshkol’s fierce creative spirit by bringing together videos of dancers performing her works with textiles (“wall carpets”) made from scraps of fabric. Following their presentations, a lively discussion with the audience touched on questions of anonymity and authorship, the current generation’s ability (or inability) to think about the future, and many other topics.