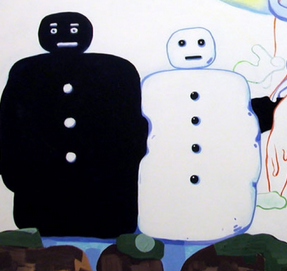 David Humphrey is an artist and writer who has shown nationally and internationally since the 1980s. His paintings have been included in exhibitions including Expecting Ecstasy at Parisian Laundry in Montreal (2008), Visible Vagina at David Nolan Gallery, New York (2010) and Jeff Gauntt & David Humphrey at Sikkema Jenkins & Co., New York (2005). His writing has appeared in publications including Art Issues Magazine and Art in America, and he has written catalog essays for a variety of artists, including Catherine Howe, Jill Giegerich, Lauren Hegarty, and Katherine Kuharic. Blind Handshake, an anthology of his writing, was published in 2010 and includes a variety of reviews, essays, and curatorial statements. He is the recipient of a John Simon Guggenheim Memorial Foundation Fellowship, two National Endowment for the Arts Fellowships, and the American Academy in Rome’s Rome Prize. His work has been reviewed in publications including The New Yorker, Art in America, The New York Times, and Artforum. He received a BFA from Maryland Institute, College of Art in 1977 and a MA from New York University in 1980. He is represented by the Fredericks Freiser Gallery, New York and lives and works in New York.
PennDesign Fine Arts Lecture Series