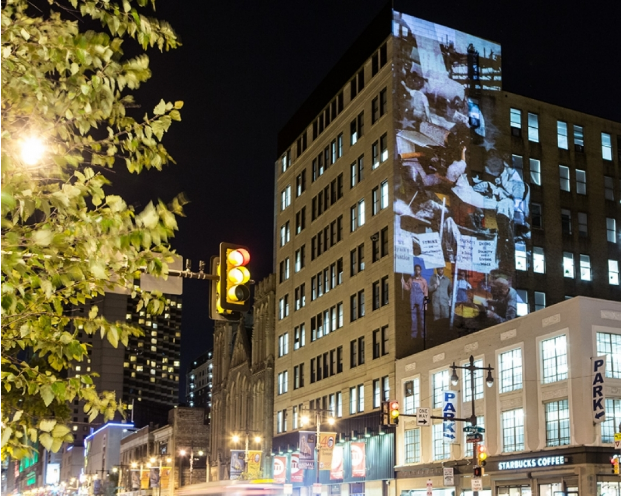 The Institute of Contemporary Art and the Department of Fine Arts at the University of Pennsylvania present a lecture by Nadia Hironaka & Matthew Suib, who employ the tools and conventions of moving-image culture to offer counter-mythical visions of our contemporary world. In doing so they re-construct existing narratives and envision new images that challenge popular understandings of History and Culture. The duo’s large-scale, often immersive moving-image installations use original and appropriated imagery and unique soundtracks to invert social conventions and scramble history. Using a collage-oriented approach, Hironaka & Suib collide imagery and narratives that encompass historical fact and popular fiction, as well as speculative futures to expose and undermine the relationship between popular media and political power.

The Philadelphia-based artists have been collaborators since 2008. They are recipients of several honored awards including a 2015 Guggenheim Foundation Fellowship, Pew Fellowships in the Arts and Fellowships from CFEVA and Pennsylvania Council on the Arts. Their work has been widely exhibited both domestically and abroad at venues including, Fondazione MAXXI (Rome), New Media Gallery (Vancouver), The Institute of Contemporary Art (Philadelphia), UCLA Hammer Museum, PS1/MoMA, Philadelphia Museum of Art and Arizona State University Art Museum. They have been artists-in-residence at the Headlands Center for the Arts, the Banff Centre, and the Millay Colony for Arts. Matthew Suib is co-founder of Greenhouse Media and Nadia Hironaka serves as a professor and department chair of film and video at the Maryland Institute College of Art. Hironaka & Suib are represented by Locks Gallery. The couple, along with their daughter and one cat reside in South Philly.

The work of Hironaka and Suib was also featured in ICA’s 2011 exhibition One is the Loneliest Number.