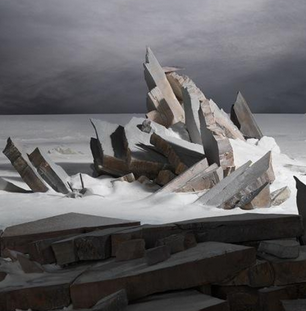 James Casebere was born in 1953, in East Lansing, Michigan. He attended Michigan State University and the Minneapolis College of Art and Design, from which he graduated in 1976 with a BFA. In the fall of 1977, he attended the Whitney Independent Study Program in New York and received an MFA from Cal Arts in 1979.

Casebere’s pioneering work has established him at the forefront of artists working with constructed photography. For the last thirty years, Casebere has devised increasingly complex models that are subsequently photographed in his studio. Based on architectural, art historical and cinematic sources, his table-sized constructions are made of simple materials, pared down to essential forms. Casebere’s abandoned spaces are hauntingly evocative and oftentimes suggestive of prior events, encouraging the viewer to reconstitute a narrative or symbolic reading of his work.

While earlier bodies of work focused on American mythologies such as the genre of the western and suburban home, in the early 1990s, Casebere turned his attention to institutional buildings. In more recent years, his subject matter focused on various institutional spaces and the relationship between social control, social structure and the mythologies that surround particular institutions, as well as the broader implications of dominant systems such as commerce, labor, religion and law.

In 2001, Sean Kelly gallery presented an exhibition that included works inspired by the indigenous architecture of the Caribbean Island of Nevis, traditional Japanese architecture and an imagined gallery space. This exhibition also featured a now well-known body of work inspired by Thomas Jefferson’s utopian Monticello. In the following years, he has continued to investigate a wide range of iconic architectural spaces, resulting in increasingly sophisticated layers of interpretation. Two photographs from his recent series, Landscape with Houses (Dutchess County, NY), were featured in the 2010 Whitney Biennial. In May of 2013, The New York Times Magazine commissioned Casebere to create a new work for their cover.

Casebere has been the recipient of numerous fellowships, including three from the National Endowment for the Arts, three from the New York Foundation for the Arts and one from the John Simon Guggenheim Memorial Foundation. His work is collected by museums worldwide, including the Whitney Museum of American Art, New York; the Solomon R. Guggenheim Museum, New York; the Metropolitan Museum of Art, New York; the Walker Art Center, Minneapolis; the Los Angeles Museum of Contemporary Art; the Los Angeles County Museum; and the Victoria and Albert Museum, London, England, among many others.