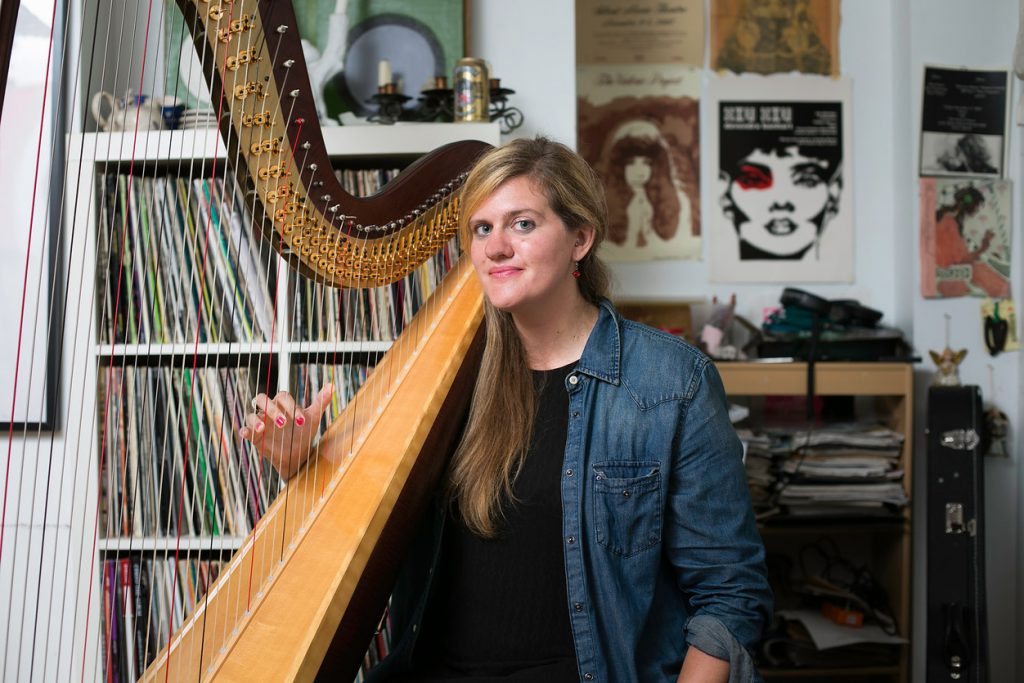 Artist Becky Suss has invited author Jim Shepard and harpist/composer Mary Lattimore for an evening of stories and sound that evoke themes in her work. Shepard, whose writings bring individual human detail into grand historical narratives, will read the short story that will appear in Becky Suss’s ICA exhibition catalogue. Lattimore’s experimental album The Withdrawing Room (2014)—which features a Becky Suss painting as a cover image—melds acoustic and electronic reverberations and welcomes the listener to take solace in the safe haven of music. Autumnal snacks and refreshments will be served.

Mary Lattimore has been classically trained harpist since age eleven. Lattimore incorporates experimental techniques and technologies into her music, thereby extending the conventions of her instrument. Lattimore’s innovative collaborative work includes recordings and performances with multi-instrumentalist Jeff Zeigler, indie rock luminaries Thurston Moore and Kurt Vile, and singer-songwriter Sharon Van Etten. She received her Bachelor of Music in Harp Performance from the Eastman School of Music in 2002 and she has since recorded the solo album, The Withdrawing Room, as well as, Slant of Light, a collaborative record with synthesizer player Jeff Zeigler.

Jim Shepard is the author of seven novels, including the recently published The Book of Aron (2015), and four story collections, most recently You Think That’s Bad (2011.) His third collection, Like You’d Understand, Anyway (DATES FOR ALL BOOKS?), was a finalist for the National Book Award and won The Story Prize. His novel Project X won the 2005 Library of Congress/Massachusetts Book Award for Fiction, as well as the ALEX Award from the American Library Association. His short fiction has appeared in, Harper’s, McSweeney’s, The Paris Review, The Atlantic Monthly, Esquire, DoubleTake, theNew Yorker, and Granta, among other publications. Four of his stories have been chosen for the Best American Short Stories, and one for a Pushcart Prize. He teaches at Williams College and in the Warren Wilson MFA program.

Becky Suss (b. 1980, Philadelphia; lives Philadelphia) received an MFA from the University of California, Berkeley and attended the Skowhegan School of Painting and Sculpture. A former member of celebrated Philadelphia artist collectives Vox Populi and Space 1026—where she has had several solo shows—Suss’s work has been featured in group exhibitions at spaces in Philadelphia and beyond including Fleisher/Ollman Gallery (Philadelphia), the Woodmere Art Museum (Philadelphia), Berkeley Art Museum (Berkeley, CA), and Kunsthalle Galapagos (Brooklyn, NY).