Please note: ICA is currently closed for installation.Join us on March 10 for the opening of our Spring 2023 season, featuringCarolyn Lazard: Long Take & Terence Nance: Swarm.
The Capricious Sky: It is not a question but a balloon, 2010/2014
Select Date
Filter
About

It is not a question but a balloon stems from my inquiry into a controversial political figure Lim Su-kyung. She is best known for visiting Pyongyang, the capital of North Korea, at the age of twenty-four, in order to attend the 13th World Festival of Youth and Students. On June 30th, 1989, she journeyed to North Korea via Germany without the approval of the South Korean government. Then, on August 15th, she returned to South Korea through Panmunjeom [i]. Upon return, she served a prison term for breaching National Security Law, and has since faced much reproach and criticism from the political right. When I was three-years-old, this young woman left for Germany in pursuit of a cause: national unification. In 2010, when I was myself 24-years-old, I met Lim Su-kyung for the first time.

The year 2010 was marked by widespread concerns over a generation of young but uninspired and restive Koreans. In his 2007 book 880,000 Won Generation, the economist Woo Suk-hoon elaborates on how the titular term refers to those born in the 1980s whose average earning as non-permanent employees amounts to approximately 880,000 Korean Won (equivalent to US $880) per month. In his prediction, this generation of workers will continue to be pushed out of the competitive job market and experience difficulty finding permanent employment. He defines this generation as one that has lost its youthful optimism, and as having a cynical and sarcastic approach to political and social problems. Several sociologists have claimed that we have entered a new age; we no longer have a cause to fight for, and are without shame, values, and interest in engaging in metaphysical ruminations. We were being blamed for not fighting back, and merely trying to ride out the difficult times.

Much of the criticism came from 386 Generation, who complained that young people today no longer confront the riot police head on, and instead just chant a few songs at a protest before heading back home. The term 386 refers to those born in the 1960s, who, having received their university education in the 1980s, were young adults in the 1990s. The 386ers had to go through a dark decade in the 1980s when the then military dictator of Korea brutally repressed the Gwangju democracy movement, which was largely led by students. Well into their 40s/50s today, they now constitute the country’s middle-aged population. Generally, they are known to have a strong sense of self and are characterized by a political zeal and their unwillingness to settle for the status quo.

Things seemed bleak in 2010. The newly elected conservative president set up speakers by the cease-fire line to blare criticisms of North Korea. The more progressive figures in the country sputtered careless comments on matters of North-South relations and the public opinion of those politicians worsened.

Is Lim Su-kyung’s visit to North Korea just an event dotting the timeline of North-South relations? What is that great cause that the past generation so dearly held on to? How do I view history from the perspective of my generation? As these questions surfaced, I began to see more clearly the gulf between the two generations, and the lack of understanding between them. Perusing relevant documents during my research, I also began to ruminate on and sentimentalize the times past when my forbearers were as young as I was. I empathized with Lim who had to endure indescribable pain. But I did not want to make work that threw into relief her life as a political figure. I wanted to move away from a nostalgic portrayal. This film is a monologue about my generation and about me as someone who often forgets the fact that I live in a divided nation-state. Rather than study official history, can I instead learn to trust and remember the past through an experience of my own? I wanted to explore this question by focusing on personal experience as an active interpretation of history. Thus, I wanted to create a little incident, via a helium balloon, equipped with a timer, en route to some unknown destination.

The helium balloon contraption seen in the film resembles those used by private organizations in South Korea to distribute leaflets to North. (Extreme right wing organizations fly these balloons by the cease-fire line to scatter leaflets that slander North Korea and glorify capitalism.) The destination of the balloon is determined by the timer, the weather, and the wind speed and direction—factors that are out of human control. But those who fly the balloon do so with conviction and with the specific intention of having it reach a particular location. This journey can be likened to a certain modernist thinking around progress: a focused charge at a set destination.

The film is divided into two parts: the question and the balloon. In the first part, a balloon carrying a leaflet cluster flies toward its destination in a straight line. The leaflet cluster acts as a weight as the balloon is carried by the wind. This scene is accompanied by a voice-over narrative by Lim herself, speaking into a walkie-talkie with no apparent receiver. Through the short-wave radio of the walkie-talkie, she transmits the events that took place between June and August 1989. The script is written in mixed tenses—past, future, and present—and draws its content from newspaper reports.

In the second part, the balloon is flown without the leaflet cluster. With nothing to weigh it down, the balloon floats lightly as though it’s swimming in the air just above Seoul. Detached from all ideologies, the balloon moves as the wind does, with no set destination.

The right wing organizations that fly these balloons, and Lim and the National Liberation People’s Democratic Revolution (NL) stand on the opposite ends of the spectrum. NL is a group that has from early on insisted on an independent and autonomous act of unification of Korea, uninfluenced by foreign powers. However, the position of such pro-North Korean and anti-American activists in South Korean politics has been weakened considerably over the years. The faction that puts unification on top of the national political agenda (over other issues, such as class division), has, at times, fanatically defended North Korea. This is why right-wing organizations as well as some North Korean defectors are hostile to unification activists. However, wherever they may fall on the spectrum, these two political groups share in common great fervor and fanatic willingness to make personal sacrifices for a cause that they believe in. In this context, I thought of the leaflet that gets attached to the balloon as a metaphor for the weight of the current political situation.

On June 21st, left Seoul to go to Tokyo. Someone asked me how I would go back to my country (Panmunjeom). I will walk there, singing a song and waving my hand. I participated in the ceremony for national peaceful parade near Baekdu Mountain on the 20th. It was a historic and moving moment. Step over with my own two feet. Wearing white jeogori [ii] and black skirt, I will say my farewell to my northern compatriots at 1:35PM for ten minutes at Panmungak [iii]. Arrived in West Berlin at 9:00AM on the 29th. The trip that would have taken me only four hours by car took ten days, twenty-four hours of which were spent in an airplane. 2:22 PM on the 15th. The 44th anniversary of independence and forty-six days after stepping on North Korean soil. If there is anyone who doubts the pure intentions behind our unification efforts, I hope to talk to them about the will and the conviction of many that I have witnessed and felt. I endeavor to lead our combined efforts in national unification. Hello, this is the student who called last time. I’m on my way to Berlin. I am going to arrive in West Berlin at nine tomorrow morning. 11:40AM United Airline 820. Arrived at Pyongyang at 5:00PM through Moscow by Joseon civil aviation. I will come back to South Korea through Panmunjeom on July 27th. We are going to sing “Our Hope Is the Unification” together, holding each other’s hands and swaying. After that day, at the end of a six-day hunger strike, I was transferred to a hospital in Pyongyang, and was treated for extreme fatigue. I arrived safely, but I am sick. I am still unwell. I will go to West Germany soon. Three phone calls during my six-day stay. The passport was issued on June 12th with one-year permission, Japan as the destination, and the number 2352651. I am standing in front of Panmunjeom to return home after a forty-some-day journey in the northern lands. Before arriving at Schoenefeld Airport to transfer to Chosun National Airplane, a call was made to the representative of the National University Student Union. I have arrived safely in East Berlin. I will leave for Pyongyang soon. Don’t worry too much, Mom. When you calm down, go visit my school. I think there would be nobody to stop us, if North and South Korean students and 700 million people headed toward Panmunjeom together. Taking the plane leaving East Berlin airport for Pyongyang; it is due to arrive in Pyongyang at 1:40PM on the 30th. But, to the ones not granting me the permission to go through Panmunjeom, I hope my actions will be appraised justly one day, and that I have raised questions. How much have you contributed to the unification of our country? Was my passage through Panmunjeom really an event that exacerbated the tension between the North and the South? I pray you find the answers deep within your heart. 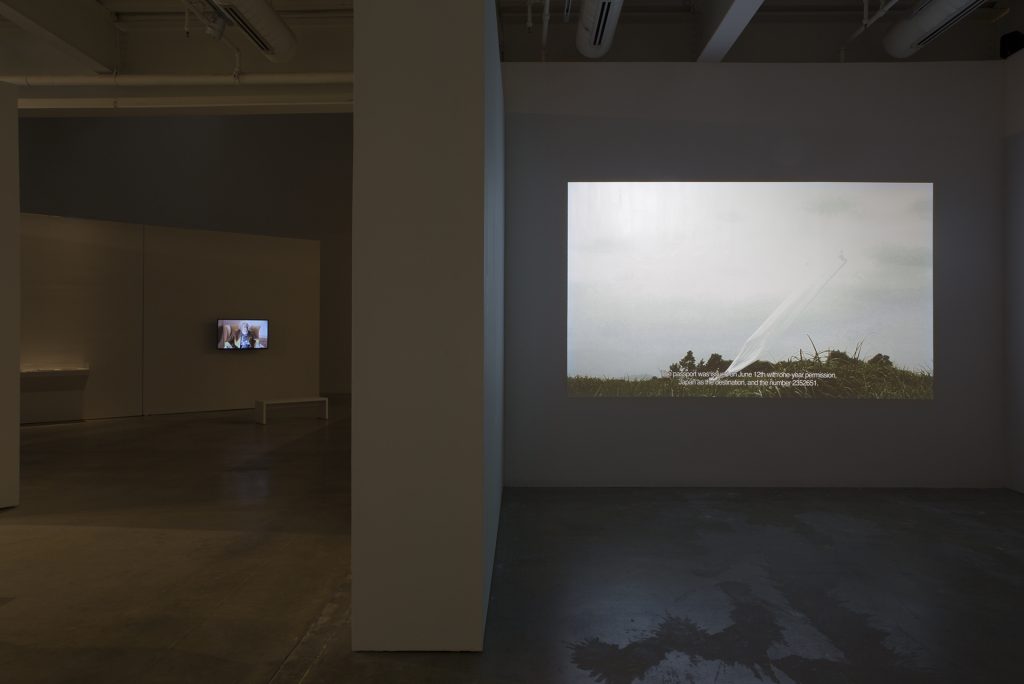 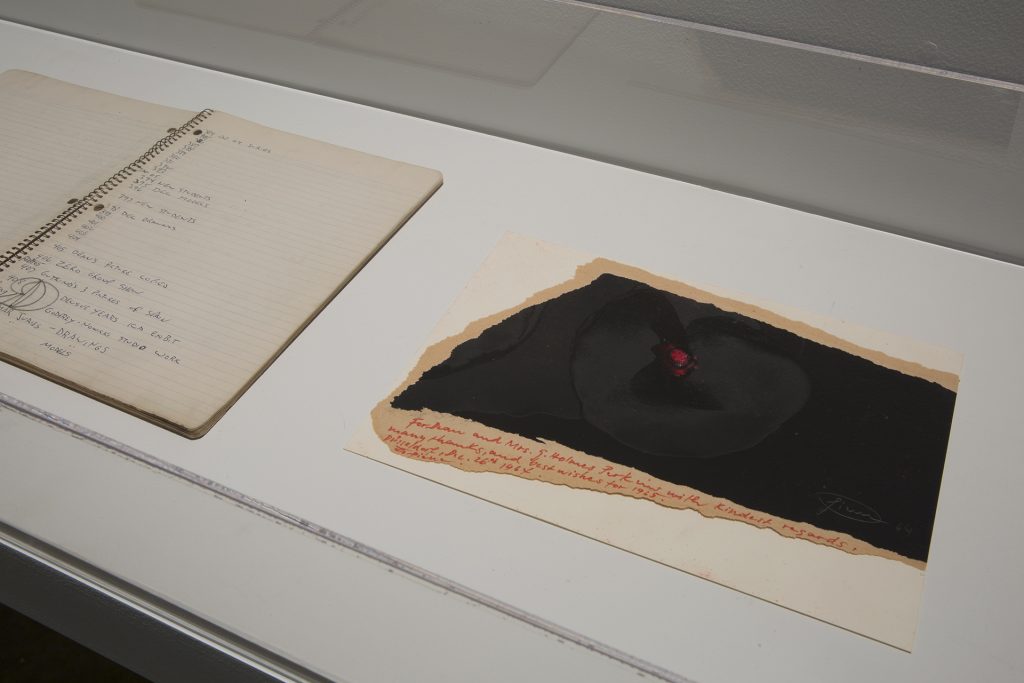 The Capricious Sky: Jeamin Cha’s It is not a question but a balloon Exhibition

“TRANSLATORS NOTESrn[i] Panmunjeom is the uninhabited border town between North
and South Koreas. The name of the village is now used metonymically to refer to
the Joint Security Area, which is the only section of the Demilitarized Zone (DMZ)
where the military troops from both North and South stand guard.rn[ii] Jeogori
is the upper garment of hanbok, traditional Korean garment.rn[iii] is a building
on the North Korean side of Panmunjeom.”