Paint Like a Long Distance Runner, or, The Phenomenology of the Everyday
Select Date
Filter
Author
Meredith Sellers 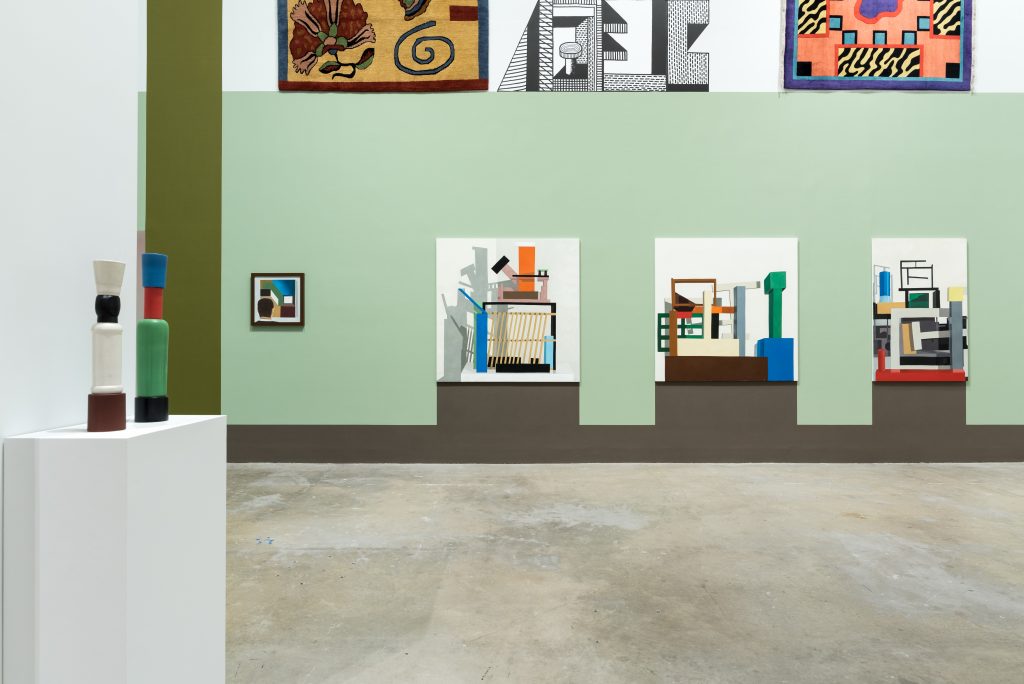 Bottles, cups, saucers, vases, jugs. Baskets, flowers, ceramics, glasses of water, blocks, a piece of bread, an orange, a pear, a couple sticks. A head of red lettuce, a funnel, pliers, a hand holding aloft a shoe, a drill, a brush, rubber gloves, the undercarriage of a motorcycle, amalgamations of wooden blocks, and shapes – shapes of every color, in every imaginable configuration. In Nathalie Du Pasquier’s BIG OBJECTS NOT ALWAYS SILENT, objects are purposeful, but never coveted. Each mass is treated the same, painted with the same attention, revealing a fascination with the mundane. These items are anonymized, timeless, unsullied by product labels and largely stripped of an identity as consumer objects. They are never fetishized, not one thing prized over another, because the paintings are not about the objects they depict, but rather about the act of painting itself. The objects are utilitarian in the most basic purpose of painting: the act of looking.

The simplicity of this gesture is astounding, not only for the pure visual pleasure it provides, but also for its lack of pretension. There is a kind of clumsiness, or perhaps a softness, in the way the paintings are rendered. A painting by Du Pasquier would not look out of place in an Intro to Painting classroom: another still life composed of household bric-a-brac. In a conventional exhibition her paintings might easily have appeared dry or bromidic but here the exhibition has been quirkily arranged in a meandering, non-linear fashion; a labyrinth of rooms with works gathered and stacked, rugs laid out and hung up high, and walls painted in blocks, stripes, and patterns of baby blue, pale pink, pistachio green, blood red, deep mocha, and slate grey. The play of the installation renders the show with a stage set-like quality, so you are seeing artworks within an artwork, an artificiality in which the paintings become both subject and prop. Turning notions of romanticism on their proverbial head, the wild mirth of the installation is perhaps the exhibition’s most direct connection to the playfulness of the postmodern Memphis design group of which Du Pasquier was famously a founder.

Devoid of wall text or labels, the show invites you to look first and foremost. The objects seen in the paintings are sometimes repeated, and there is a self-reflexive déjà vu like a game of hide-and-seek, as you realize that the ceramics and carpet patterns and wooden constructions on pedestals throughout the gallery make their way into some of the paintings. Though her paintings are reminiscent of the works of an array of 20th-century modernist painters, moments of surprise like these release Du Pasquier from the somberness of that most famous painter of bottles and cups, Morandi, and from the severity of the mechanized blocks of Léger or Sheeler. 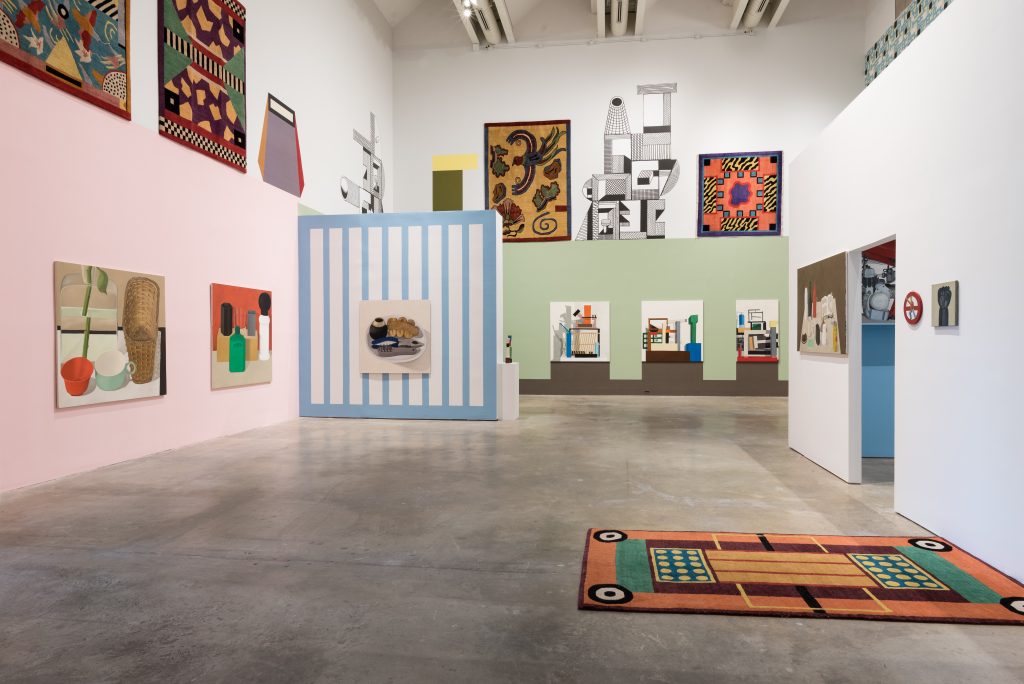 Or perhaps Du Pasquier’s paintings feel strange because they are so utterly sincere. Painting as a contemporary medium has long held a self-deprecating, ironic edge, an apology of sorts for its once-unchallenged dominance. But these paintings are post-ironic; they encompass the searching naiveté of a self-taught painter dedicated to the meditative, spartan, almost philosophical mode of painting “without thinking,” as Du Pasquier has stated. While she clearly relishes painting, Du Pasquier doesn’t appear to fetishize the medium. Painting is a daily practice for her, and she says she paints for eight hours every day. She moves quickly, without fastidiousness or apprehension, and her paintings are absent of material triangulation and reliance on tools. Cascades of visible but gentle brushstrokes, largely uniform in size, fill them, lending them a blocky overall sameness. Flat areas of color overwhelm sections of paintings, surrounded by the ungainly brushwork, and geometric edges at times more closely resembling dough than planes meeting in space. These sophomoric peculiarities make the work all the more intriguing because they reveal that Du Pasquier is not interested in the finicky, technical mastery of illusionism, but is instead communicating in a painterly shorthand, moving through each work in a phenomenological observation of the world she’s created inside her studio.

Untitled (2010), one of her later paintings—which appear from across the room to be quite hard-edged abstractions—is an amalgam of blue and red and green and black blocks and slats, a painting of a construction. Approaching it, I was amazed to see the hardness of the lines dissipate as I got closer, showing the fuzzy, natural edge of a brush, without the telltale marks of tape that force straight edges. Some of Du Pasquier’s paintings feature perspectival shifts in a manner similar to Cézanne’s late still lifes, or Picasso’s earliest experiments with Cubism. In Con le ombre come ali di farfalle (1997), a collection of bowls, a saucer, a vase and two sticks appear to stand on a table tilted vertically, suggesting a shift in time as well as space, as the artist’s perspective changes. These paintings are meditative but unfussy. Moments like this show a dedication to the medium, but moreover, a discipline to the art of human perception. 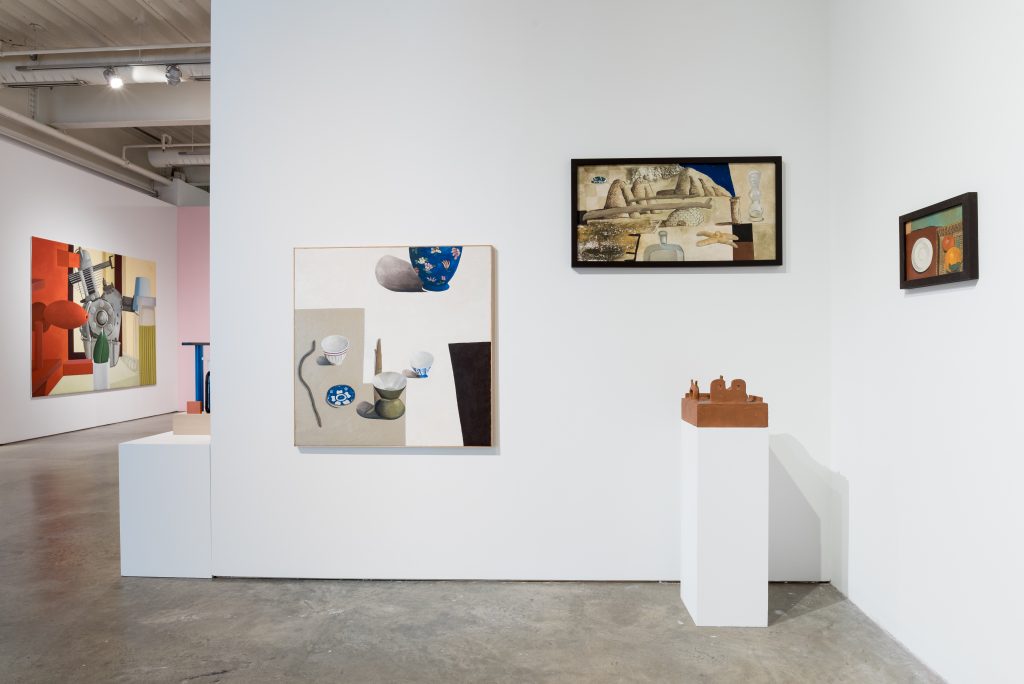 The sound work by Steve Piccolo which shares the title of the show, BIG OBJECTS NOT ALWAYS SILENT, is another enigma. In a room filled with towering geometric forms, all painted a flat industrial gray, Piccolo’s voice rings out between long pauses, growling spoken word non-sequitur epithets: “Work like a chimney, smoke like a sail … Taste like a picture, snarl like a gift … Walk like an Egyptian, paint like a long distance runner.” This work, in providing an ambient sea of nonsensical similes, offers a clue that not all of Du Pasquier’s objects may be as simple and straightforward as they appear. It adds a wink of something more fantastical than mundane, a wryness that pervades the work, masquerading as painterly naiveté. 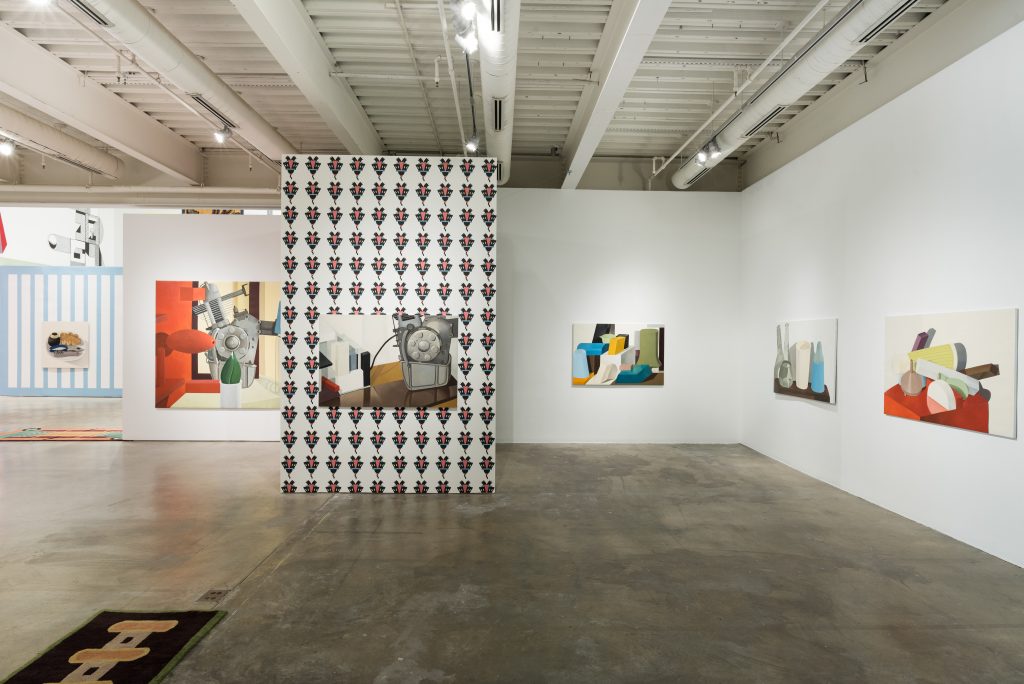 Umberto Eco said of Morandi, that great master of the natura morta, “How can you tell such different stories by depicting not a nativity, or a storm at sea, a sunset on a lake, or the birth of spring, but an array of objects from a junk shop? You have to love the world and the things that are in the world, even the humblest, the light and shadow gladdening or saddening them, and the very dust that chokes them. Morandi reaches the peak of his spirituality as a poet of matter.” Much has been made of Morandi’s self-imposed hermetic, ascetic existence in Bologna, painting the same objects every day in the same small room for the entirety of his earthly existence. Though Du Pasquier practices her work with a similar dogged rigor, the difference between them lies perhaps in her applied approach.

In contrast to Morandi’s parochial, decades-long relationship with a spiraled bowl or a slim-necked bottle, objects cycle in and out of Du Pasquier’s studio, constantly changing. Unexpected images also appear, particularly in her earlier paintings which reference the expressionistic, dreamlike imagery of the Italian 70s Transavanguardia movement, and, later, in the subtly skewed surfaces of her still lifes. Her most recent paintings have also stepped away from observation, focusing instead on invented forms. Her works explore not just the phenomena of the world around her, but also the world inside her head. She creates her own rules of engagement. She moves steadily, at her own pace, in it for the long haul—Du Pasquier paints like a long distance runner. As evidenced by her exuberant, trailblazing textile designs for Memphis, art, for her, is not a religion but rather a sport. She plays it without dogma but with an arch ebullience.

+
Meredith Sellers is an artist and writer living and working in Philadelphia and an editor for Title Magazine.
+