Curated by ICA’s 2004–2005 Whitney-Lauder Curatorial Fellow Sara Reisman, Soft Sites recognizes a new paradigm in site-specific practice that has emerged during the age of globalization. The term “soft sites” refers to locations where significant physical change due to natural or human cause has taken place, descriptive of locations where earthquakes have destabilized the topography, referencing certain areas of lower Manhattan after 9/11, the Southeast Asian region so devastated by the tsunami at the end of 2004, and the Gulf Coast where Hurricane Katrina wreaked havoc in the fall of 2005.

Selected artworks take into account the intangible qualities of location—history, desire, identity, culture, and sense of time—that, in combination, raise questions about what constitutes site-specificity. Positioning artworks in two places, the ICA’s Project Space and Bartram’s Garden in Southwest Philadelphia, Soft Sites juxtaposes mobile, site-specific artworks within the gallery with artworks that respond to a particular historic site. The contrast of the two spaces raises awareness of the fluidity of the contemporary site in comparison to the 250-year legacy of John Bartram and his contributions to the realm of botany, science, nature, and philosophy.

Soft Sites 1
Soft Sites 2
Soft Sites 3
Previous
Next
ICA is grateful for support from the University of Pennsylvania Diversity Fund. Additional funding has been provided by The Horace W. Goldsmith Foundation, the Commonwealth of Pennsylvania Council on the Arts, The Dietrich Foundation Inc., the Overseers Board for the Institute of Contemporary Art, friends and members of ICA, and the University of Pennsylvania. ICA is also grateful for inkind support from Loews Philadelphia Hotel.
There are 2 connections to: Soft Sites
2 connections to: Mary Ellen Carroll (Artist) 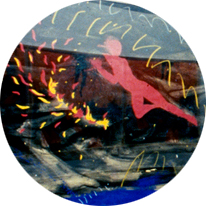